Students can Download Chapter 8 Biodiversity and Conservation Notes, Plus Two Zoology Notes helps you to revise the complete Kerala State Syllabus and score more marks in your examinations.

Biodiversity
The diversity is not only at the species level but at all levels from macromolecules within cells to biomes. Edward Wilson has described the biodiversity as follows

(i) Genetic diversity:
It is diversity at the genetic level. For example the Rauwolfia vomitoria growing in different Himalayan ranges shows the genetic variation i.e due to the concentration of the active chemical (reserpine) that the plant produces.

India has more than 50,000 genetically different strains of rice, and 1,000 varieties of mango.

(iii) Ecological diversity:
It is the diversity at the ecosystem level. For example, the different type of ecosystems within India are deserts, rain forests, mangroves, coral reefs, wetlands, estuaries.

Alpine meadows has a greater ecosystem diversity than a Scandinavian country like Norway. Internationally, the biodiversity and its conservation are vital environmental issues because it is important for survival of human beings.

1. How Many Species are there on Earth and How Many in India?
According to the IUCN (2004), the total number of plant and animal species described is slightly more than 1.5 million.

But several species of plants and animals would have to be discovered in tropics and temperate regions.

Among animals, insects are the most species-rich, it is more than 70 per cent of the total. This indicates that out of every 10 animals on this planet, 7 are insects.

The number of fungi species in the world is more than the combined total of the species of fishes, amphibians, reptiles, and mammals. 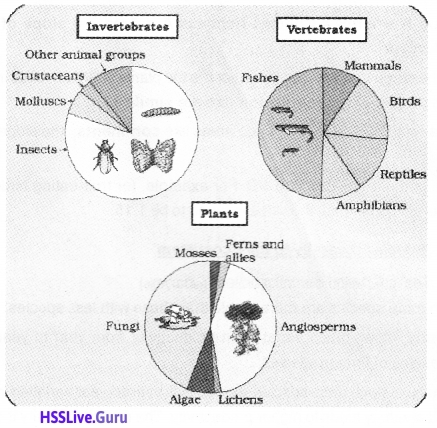 2. (i) Latitudinal gradients:
The species diversity decreases from the equator towards the poles. Tropics (latitudinal range of 23.5° N to 23.5° S) have more species than temperate or polar areas.

India (tropical latitudes) has more than 1,200 species of birds. Equador forest in a tropical region has 10 times species of vascular plants than temperate region, the Midwest of the USA.

Topical Amazonian rain forest in South America has the greatest biodiversity on earth. It possess more than 40,000 species of plants, 3,000 of fishes, 1,300 of birds, 427 of mammals, 427 of amphibians, 378 of reptiles and of more than 1,25,000 invertebrates. About two million insect species have to be discovered in rain forests.

The reason for the greatest biodiversity in tropics

(ii) Species-Area relationships:
German naturalist and geographer, Alexander von Humboldt observed that relation between species richness and area to be a rectangular hyperbola. It is a straight line in logarithmic-spate. The relationship is given below as equation.

The value of Z lies in the range of 0.1 to 0.2, (whether it is the plants in Britain, birds in California or molluscs in New York state, the slopes of the regression line are similar).

But, the species-area relationships among large areas like continents, the slope of the line to be much steeper.

Here the Z value lies in the range of 0.6 to 1.2. For example, for fruit-eating birds and mammals in the tropical forests of different continents, the slope is found to be 1.15.

3. The importance of Species Diversity to the Ecosystem:
The communities with more species are more stable than those with less species. The stable community shows much variation in productivity from year to year; they are resistant to disturbances and spreading of foreign species.

David Tilman found that plots with more species showed less year-to-year variation in total biomass. He also showed that increased diversity leads to higher productivity. The rich biodiversity is not only for ecosystem health but helpful to the survival of the human race.

4. Loss of Biodiversity:
The colonisation of tropical Pacific Islands by humans led to the extinction of more than 2,000 species of native birds.

The study fossil records indicates the mass extinction. It is estimated to be 100 to 1,000 times faster than in the pre-human times.

Causes of biodiversity losses: It is mainly due to human activities.
There are four major causes

(i) Habitat loss and fragmentation:
This is the most important cause of extinction of animals and plants. This was mainly in tropical rain forests. More than 1000 hectares of rain forest have been lost in recent decades.

The Amazon rain forest is cleared for cultivating soya beans or for conversion to grasslands for raising beef cattle.

The degradation of many habitats by pollution affects the survival of many species. It results large habitats are broken up into small fragments. So the mammals and birds requiring large areas are affected, it leads to the reduction in population.

(iii) Alien species invasions:
The introduction of foreign species cause the reduction or extinction of indigenous species. The Nile perch introduced into Lake Victoria in east Africa led to the extinction of more than 200 species of cichlid fish in the lake.

Introduction of African catfish Clarias gariepinus for aquaculture purposes is a threat to the indigenous catfishesin river.

More than 25 per cent of the drugs are obtained from plants. Many medicinally useful plants would have to be discovered from the tropical rain forests.

(2) Broadly utilitarian:
Biodiversity plays a major role in ecosystem services . Amazon forest is through photosynthesis produce 20 per cent of the total oxygen in the earth’s atmosphere.

Pollination is another ecosystems service by bees, bumblebees, birds and bats. Nature provides aesthetic pleasures of watching spring flowers in full bloom and bulbul’s song in the morning.

(3) Ethical:
Every species has an intrinsic value so they are conserved for future generations.

Besides these the sacred groves such as in Khasi and Jaintia Hills in Meghalaya, Aravalli Hills of Rajasthan, Western Ghat regions of Karnataka and Maharashtra and the Sarguja, Chanda and Bastar areas of Madhya Pradesh conserve and protect large number of rare and threatened plants.

Ex-situ Conservation:
It is the conservation of threatened animals and plants outside their natural habitat. Examples are Zoological parks, botanical gardens and wildlife safari parks.

As a part of conservation gametes of threatened species can be preserved in viable and fertile condition for long periods using cryopreservation techniques. In this technique, fertilized eggs, embryos, seeds etc are also stored.

In the Convention on Biological Diversity (The Earth Summit’) held in Rio de Janeiro in 1992, nations taken measures for conservation of biodiversity and its sustainable utilisation.

In a follow-up, the World Summit on Sustainable Development held in 2002 in Johannesburg, South Africa, 190 countries taken the decision to achieve biodiversity at 2010 and decrease the current rate of reduction.