1. The period from the 8th century to the 18th century is an important era in Indian History. It was at this time some significant changes occurred in the religious faiths and traditions of the people.

A number of Hindu reformers and ascetics started experimental movements. They are called ‘Bhakti Movements’. They all tried to get salvation (Moksha) through piety and devotion.

There were also reform movements in Islam which are called Sufism. Sufism also became popular in India. Both Sufism and Bhakti Movements influenced the life of the people deeply.

2. The leaders of the early Bhakti Movements were pious acetic poets. Around them there were communities of their devotees.

4. Islam reached India through the Arabs. In CE711, under the leadership of Muhammed Kasim, the Arabs conquered Sindh and it became part of the empire of the Khalifa. The Sindh conquest by Arabs paved the way for the establishment of Delhi Sultanate.

It was established in 1206 jointly by Turks and Afghans. Later, in Deccan and in other parts of the country Sultanates were formed. Islam became the official religion of many rulers in different regions of India. The influence of Islam did not limit itself to the ruling class. It spread widely among farmers, artisans, warriors and traders.

5. Sufism is a mystic movement that developed in Islam. It was a reform movement. In the first centuries of Islam, some thinkers known as Sufis started this Movement.

6. In the Sufi Movement there were 12 Sufi groups or Silsilas. The silsilas were led by a famous mystic, who lived in the Dinashram with his followers. By the end of the 12th century, most of the Sufi Silsilas came to India.

7. We especially study about three famous people of this time – Kabir, Guru Nanak and Mira Bai. 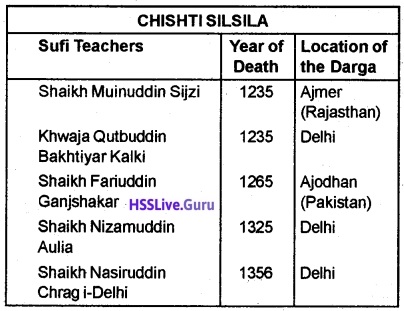